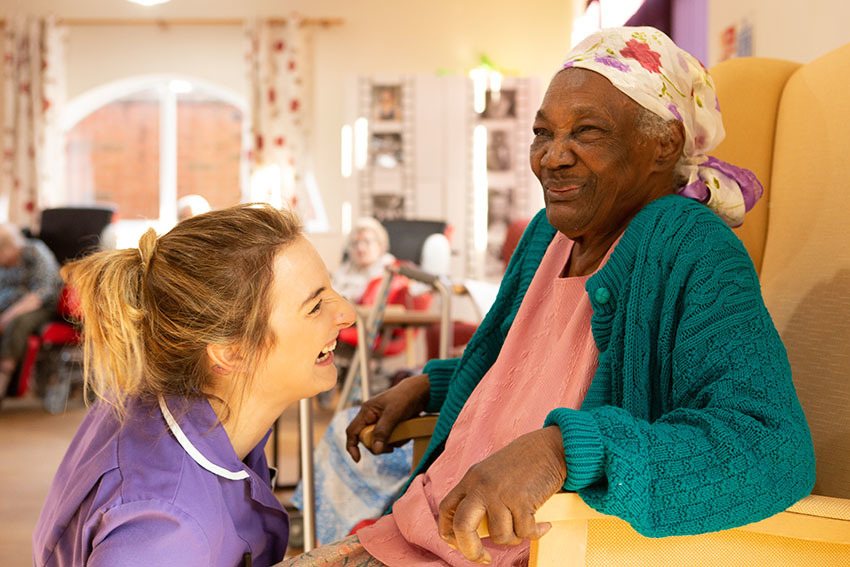 Our staff consists of a very well trained, experienced and cohesive team. Cavendish has very low staff turnover, thus limiting the use of agency staff which results in a familiar face to our residents and staff that are able to forge a strong and caring relationship with our residents.

Since leaving school to begin a career in care, Sarah steadily progressed from a Care Assistant to Deputy Manager to accomplished Care Home Manager and has been successfully managing care homes for the last twelve years. Sarah joined Cavendish at the beginning of 2020.

Cavendish is fortunate to be lead by Sarah who’s knowledge, experience, hands on approach and passion for person centred care has been welcomed by all.

The management of the home is of the highest quality

The management of the home is of the highest quality. The manager and senior support staff do much more than their job to ensure the residents and those who are their relatives are well informed and kept at ease. What I would have heard from other sources, this care home is vastly superior in nearly all respects.

The building is old and takes a lot of cleaning and maintenance but this is carried out to a very satisfactory level. I feel completely confident that the residents, some of whom must be very difficult are treated with dignity and as far as I can see, want for nothing. The senior staff should get a special mention showing both enthusiasm and dedication, my experience has been satisfactory at all levels.

Jacky Barnett began working for Cavendish as a Care assistant in 2000, progressing to Senior carer until 2005 when she left the home to live abroad.

Upon returning to the UK in 2010, within two days of arrival, Jacky returned to Cavendish as a Senior carer. In 2014 she became the activities manager and in 2016 was runner up for the Gloucestershire Care Providers Association award for activities and in 2017 won the award.

Jacky puts her formal training into practice by engaging with the residents one to one as well as small groups and providing activities, sights and sounds that stimulate their senses consciously and subconsciously.

Lorraine Hopkins started working at Cavendish in 1994, when it was a 13 bedroom home and has grown with the home.

Lorraine manages housekeeping yet makes time to be involved in providing care and assisting the activities manager. With almost twenty five years service to Cavendish, Lorraine has a very good and close relationship with many of the residents and it is not unusual to see Lorraine visiting residents or assisting with outings on her days off.

Cavendish is very grateful for the last twenty five years super service and look forward to another twenty five!

Cavendish ensures that it has a senior carer (proficient in administering medication) on duty 24/7 and they have access to the person “on call” and/or manager at any time of day or night.

The carers work closely with the Senior carers and numerous carers have been with Cavendish for over 10 years providing our residents with a high level of personalised care.

Housekeeping staff work relentlessly keeping Cavendish clean, neat and tidy, germ free, yet retaining a homely feel. Our team has been with Cavendish for over ten years.